A local office kitchen has taken passive aggressive kitchen signage to a whole new level by contracting renowned hardman Rambo to enforce the need to clean up after yourself. The sign, erected in the shared kitchen of an inner city accounting office, also encourages workers to “call out” a colleague who leaves a mess. 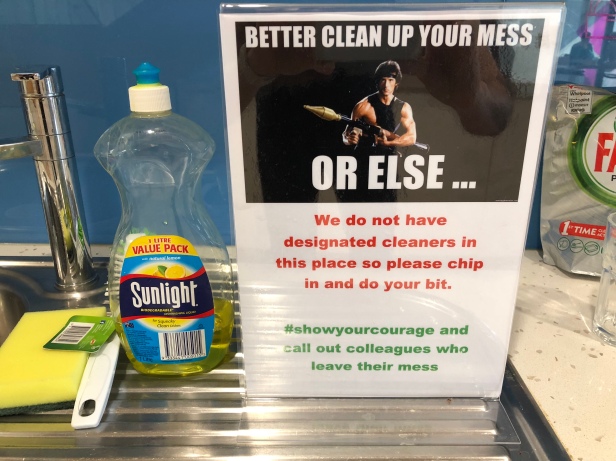 While passive aggressive office notes are nothing new, local human resources expert Karen Treloar has told The Watsonia Bugle that this could be the first one that has essentially encouraged open warfare between colleagues. Treloar said, “It’s actually quite remarkable. I don’t think I’ve ever seen anything like it. The Rambo pic on its own is a bit much, but employing a hashtag that implores workers to show some courage and confront others about their poor kitchen etiquette is a pretty dangerous tactic. I wouldn’t encourage it in my line of work as a consultant.”

Despite our very best investigative journalism, so far we have been unable to identify the person responsible for the sign. Many inhabitants of the office have their suspicions, but none were willing to go on the record.