A leading Melbourne-based newspaper remains unclear exactly how it feels about cyclists, after publishing conflicting sentiments on two front covers in as many days. The self-proclaimed top newspaper in Australia, the Herald Sun, has today gone with the attention-grabbing headline of “VEHICLES v BIKES” and, in the process, demonised cyclists after the head of a cycling group made the otherwise sensible suggestion that drivers in cars should limit their mobile phone use.

While this anti-cyclist position is hardly surprising coming from the Herald Sun, it seems to have confused some readers who only yesterday read the same newspaper bemoaning the fact that “only 5.5%” of Melbourne’s commuters either ride a bike or walk to work – a statistic given in the context of a wider report complaining about increased congestion on our roads: 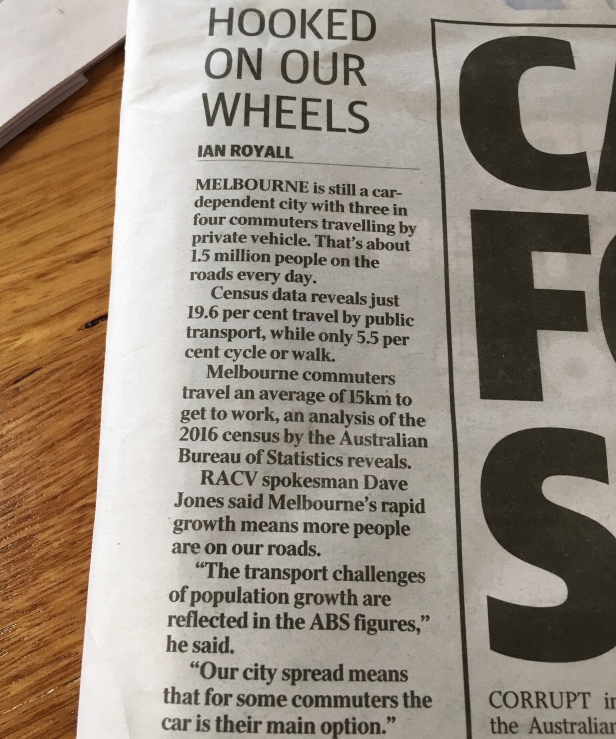 Despite struggling to take a definitive view on the age-old debate of the viability of having cyclists on the road, you can’t help but be impressed by the Herald Sun’s ability to spin the view of one person into a full-blown “VEHICLES v BIKES” headline that effectively pitches every single motorist against every single person on a bike in the entirety of Melbourne. While they acknowledged that a recent report claims that “texting, web browsing and other such phone use by drivers will help push Victoria’s annual road toll to 329 by 2030, up from 258 last year”, they obviously couldn’t resist the urge to turn the findings into yet another rehash of the well-worn turf war on our roads, rather than actually tackling the issue of phone use amongst drivers.