A national chemist franchise is arguably having one of the most bizarre each way bets in the current retail climate, defying laws of grammar to basically admit that it’s not the cheapest of its kind in Australia. While shouting “AUSTRALIA’S CHEAPEST CHEMIST” on signage at the front of its stores across the country, eagle-eyed shoppers may also note a much smaller “Is This?” next to the claim being made by Chemist Warehouse. 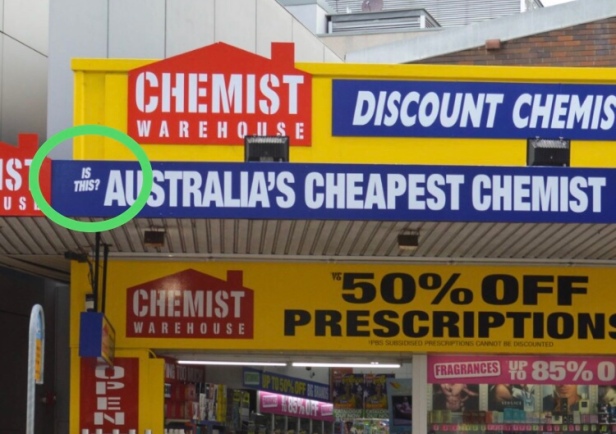 Whether the smaller qualifying statement was added later on due to the protestations of rival chemists remains unclear, but shoppers from across the country are not happy about the current state of the signage. Perhaps it is a relic from a previous time when they were unchallenged at the nation’s cheapest chemist, evidenced by the absence of a prefix on Watsonia’s newish branch of the franchise.

Regardless of the background, one Victorian shopper, who requested anonymity, told The Watsonia Bugle, “It’s a bit cheeky isn’t it. Very cheeky, in fact. I only just noticed it a few weeks ago. Besides, grammatically it doesn’t even make sense. The question mark should be at the end of the word ‘chemist’. And I should know, I used to be an English teacher!”

One other customer, who gave his name only as Darren, was slightly less forgiving. He said, “It’s outrageous if you ask me. You can’t do that people. It’s changed my whole opinion on the store. I always just assumed that they were cheaper because they told me they were.”